A comprehensive collection of 225+ symbols used in algebra, categorized by subject and type into tables along with each symbol's name, usage and example.

Algebra is a subfield of mathematics pertaining to the manipulation of symbols and their governing rules. The following is a compilation of symbols from the different branches of algebra, which include basic algebra, number theory, linear algebra and abstract algebra.

For readability purpose, these symbols are categorized by their function and topic into charts and tables. Other comprehensive lists of symbols — as categorized by subject and type — can be also found in the relevant pages below (or in the navigational panel).

In algebra, constants are symbols used to denote key mathematical elements and sets. The following tables document the most common of these — along with each symbol’s name, usage and example.

In algebra, certain sets of numbers (or other more elaborated objects) tend to occur more frequently than others. These sets are often denoted by some variants of alphabetical letters — many of which are of the blackboard bold typeface.

Since algebra is concerned with the manipulation of mathematical symbols, it often draws upon a wide range of variables as placeholders for varying objects and quantities. The following table documents the most common of these — along with their respective usage and example.

As a foundational component of algebra, function plays a key role in establishing the rules pertaining to the manipulation of symbols. The following table documents some of the most common function-related operators and notational symbols — along with their meaning and example.

In algebra, operators can be thought of as a special type of function mapping one or multiple mathematical entities to another, and are often given special names or notations due to their repeated occurrences.

In particular, these operators are often related to numbers, key functions, linear algebra and abstract algebra — the vast majority of which are found in the tables below. For common operators in general, see common operators.

In algebra, relational symbols are used to express the relationship between two mathematical entities, and are often related to concepts such as equality, comparison, divisibility and other higher-order relationships. The following tables document the most common of these — along with their usage and meaning. 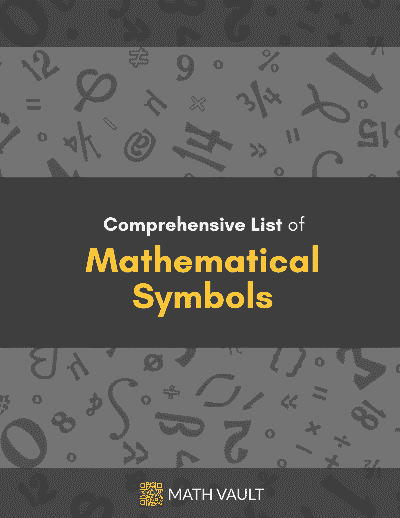